We’ve been working with our trolls this week in the Creative Magic Workout, which is one of my favorite things to do.

Trolls are what I call the critical thoughts that divebomb you when you’re trying something new or creative or risky or, you know, taking a shower.

That’s what happened to me this morning! I was in the shower and the thought popped into my head: “You should have figured this out five years ago.”

(“This” being “how to balance motherhood and making enough money and having a career that makes everything you want in life possible.”)

And I almost let that thought slip by unnoticed – it’s a thought I have often — but because we’ve been working with trolls, I did notice. I stopped and went, wait a minute, what was that? Is that a troll talking?

You should have figured this out five years ago.

So I did a transformation spell. This is what I call the process of considering, questioning and turning around those critical thoughts.

I considered it: is it true, that I should have figured this out five years ago? Do I agree?

Well, not really. I wish I had figured it out, but I also don’t know how useful it would have been. Or how possible. My life was totally different then, and I’m not sure I could have even imagined how it would change, much less figure out how to respond to that change.

I questioned it. What would be different now if I had “figured it out”? What does figuring it out even mean? Is it possible to figure it out? What is the benefit of figuring something out in advance – wasn’t I figuring things out then that were useful then? Aren’t I figuring this out now? Are there other women I can think of who have figured it out? Honestly, I can’t think of a single mother who has figured it all out. Everyone’s struggling with something.

And I turned it around, which means, I came up with opposite thoughts that are also true.

I should not have figured it out five years ago. In fact, it would have been ridiculous and impossible and kind of miraculous if I had.

It is a waste of time to try to imagine what your life might need in five years. It would have been a waste of my time then.

I am figuring this out now and that is the best use of my time and energy.

I did figure this out five years ago! I figured out some of it, anyway.

Once I went through all this – which was less than five minutes, tops – I was able to laugh at that troll. I wasn’t wrestling with it or struggling to shake it off. It stepped away of its own accord.

Later when I was out of the shower I thought: who is this troll, exactly?

And what came to mind were associations of impatience and wanting to know everything in advance and being very annoyed when things don’t go a certain way. I got an image of the classic rom-com business woman protagonist who falls in love with a laid back handyman and learns to laugh and not take herself so seriously.

So I sketched a picture. Here it is: 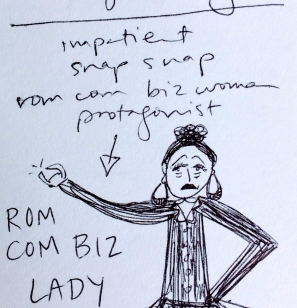 Do you want to try it? Notice your critical thoughts as you go about your day, and when you have a couple minutes, jot down associations with that critical voice, sketch a picture, and give that troll a name.

And then do a quick transformational spell.

And see if the troll doesn’t soften, stand back and let you cross that bridge after all.

Register for my Free Zoom Class!