One of the things we do in the Creative Workout Group is come up with righteous brags about ourselves.

This might seem like a random tangent — what does bragging about yourself have to do with bringing more creative energy into your life? But I believe learning how to brag is inextricably bound up with making space in your life for creative expression, and here’s why: being creative is not a passive state. It is an action. It’s a choice you make to express yourself, to dedicate time and energy to creative expression.

And that takes courage and confidence and guts.

It takes courage to face down your inner critics who are telling you, this is self-indulgent or this is too hard or you’ve got no talent.

It takes courage to stand up for your right to express your thoughts and opinions and ideas.

It takes courage to own your mistakes and your contradictions and your messy, human life.

And I don’t believe that courage is accidental or genetic — I believe it’s a muscle that can be developed.  It’s why I’m so passionate about connecting people with their creative impulses: because it’s HARD TO DO on your own, and so much easier when you’re surrounded by other people who are doing it too. Other people to inspire you and to show you how inspiring you are. Other people to spur you on and motivate you and make you laugh. Other people to say, it’s not just you, we all struggle with this.

Do you find it easy to brag about yourself and what you’ve done? No? Well let me tell you, you are not alone. Whenever I say we’re about the spend the next hour bragging about ourselves, everyone shrinks back and folds their arms and nervous laughter fills the room.

Maybe because we associate bragging with douchebags, blowhards, salesmen and politicians? Maybe because being trapped in a corner with a braggadocious alpha male at a party is the worst corner to be in?

Bragging is one of those elusive skills that you only notice someone doing when they’re doing it badly. Which makes it a tricky skill to master. But when it’s done right, people don’t leave thinking, what a braggart, they leave thinking, damn, she’s a badass. She knows what she’s talking about. I love her ideas.

In other words, we can learn how to brag conscientiously, thoughtfully and righteously, in a way that draws people in, impresses and engages them, gets them nodding and laughing and agreeing.

I’ve spent a lot of time studying what makes a righteous brag. I’ve studied the masters, I’ve tried and failed and tried again, and I’ve figured out that there are 4 elements you can play with to make your own brags righteous.

Before I tell you what they are, let’s prime the pump. Right now, get out a sheet of paper and write down a list of things you’ve done that you are proud of.

They could be your all time greatest hits. They could be what you’re proud of this week. They can be epic or tiny. And don’t worry about being embarrassed — these are not for sharing with others! This is just a starting point.

Now obviously, if you got into a conversation with someone and read that list, that would be a weird conversation, right? So we’re going to take that list of accomplishments and bring them to life using these four elements:

1. Make them measurable. Show us the data, show us what your accomplishment means in numbers and details.

I walk a lot –> I walked ten miles yesterday.

I made dinner last night  –> last night I planned a meal, bought all the groceries, got everything prepped ahead of time and when we got home I got dinner ready in 30 minutes. With two kids circling around me asking when dinner would be ready.

I wrote a novel –> I sat down every day for 365 days and wrote a 300-page novel about a lunch lady named Flo who is secretly a private eye.

2. Make them metaphorical. Use images and comparisons to show us what this accomplishment feels like to you.

I’m good at math –> give me any two numbers and I’ll add them up in my head faster than the speed of light.

I got a raise –> I walked into a room full of sharks and told them what I was worth and they tried to sweet talk, intimidate and circle around me but I didn’t flinch and waited them out and I got that goddamn raise.

I moved to a new city –> I left behind the place where I was born and landed on a new planet. It was like being a lone astronaut in a strange land, cut off and alone. Slowly I found my people and learned how to breathe and built a new life.

3. Sneak them in the back door. The fancy way to say this is, make it a presupposition. This is when you say something and the meaning is implied without you having to say it directly. Sounds complicated, but here’s what I mean:

I’m writing another novel (presupposition: I have written novels)

You can use this way of constructing a sentence to sneak in your brags, which is especially useful for women (I got this idea from The Verbal Art of Self-Defense, which is all about how to use language to defuse conflicts, flip the script and assert our strength without attacking — it’s like judo for conversation, and I highly recommend reading it).

Basically, you sneak in the brag by focusing on something else and pretending that’s your point, and the impressive thing you did is merely an afterthought.

I got a promotion –> When I got promoted to Director of Sales, I realized that I really enjoyed speaking in front of people.

I make dinner every night –> After I get dinner on the table every night, my kids and I like to talk about our day.

I run marathons –> It’s strange how often I end up running marathons.

(If you want to geek waaaaaay out on this, here’s the wikipedia page for different kinds of presuppositions: https://en.wikipedia.org/wiki/Presupposition)

4. Share the whole journey. From down and out to up and coming, from hard living to easy street, from nothing to something, from rags to riches. (Don’t skip to the riches.)

I’m a fast reader –> I was dyslexic as a kid, so I learned to read the hard way, and slowly over time I got to where I can read a 200 page book in one day (measurable).

I’ve got a lot of money in the bank –> My parents had nothing and they scrimped and saved so I could go to college, and I worked nights as a waitress then went to classes every day, so when you see me with my millions (presupposition) and think I have it easy, know that I worked my ass off to get here.

I’m raising a 3-year-old –> three years ago, after 44 hours of labor (measurable) and with the help of my partner, my best friend, my mom and my sister, I gave birth to my baby boy, and the world as I knew it tilted on its axis (metaphor)

So here’s an exercise for you. You can apply these tricks to your list of things you’re proud of — or take it one step further and use it to brag about something silly, like painting your toenails, making yourself a cup of coffee, or winning the spelling bee in 5th grade.

Or in my case: laying down in bed to binge watch all the episodes of Atlanta.

Here’s a video of me demonstrating exactly that. And this is an example of me doing it badly — imagine what it’s like when I’m bragging at full power (presupposition: I am a truly righteous boaster).

Join my coaching group, liberate your creative self 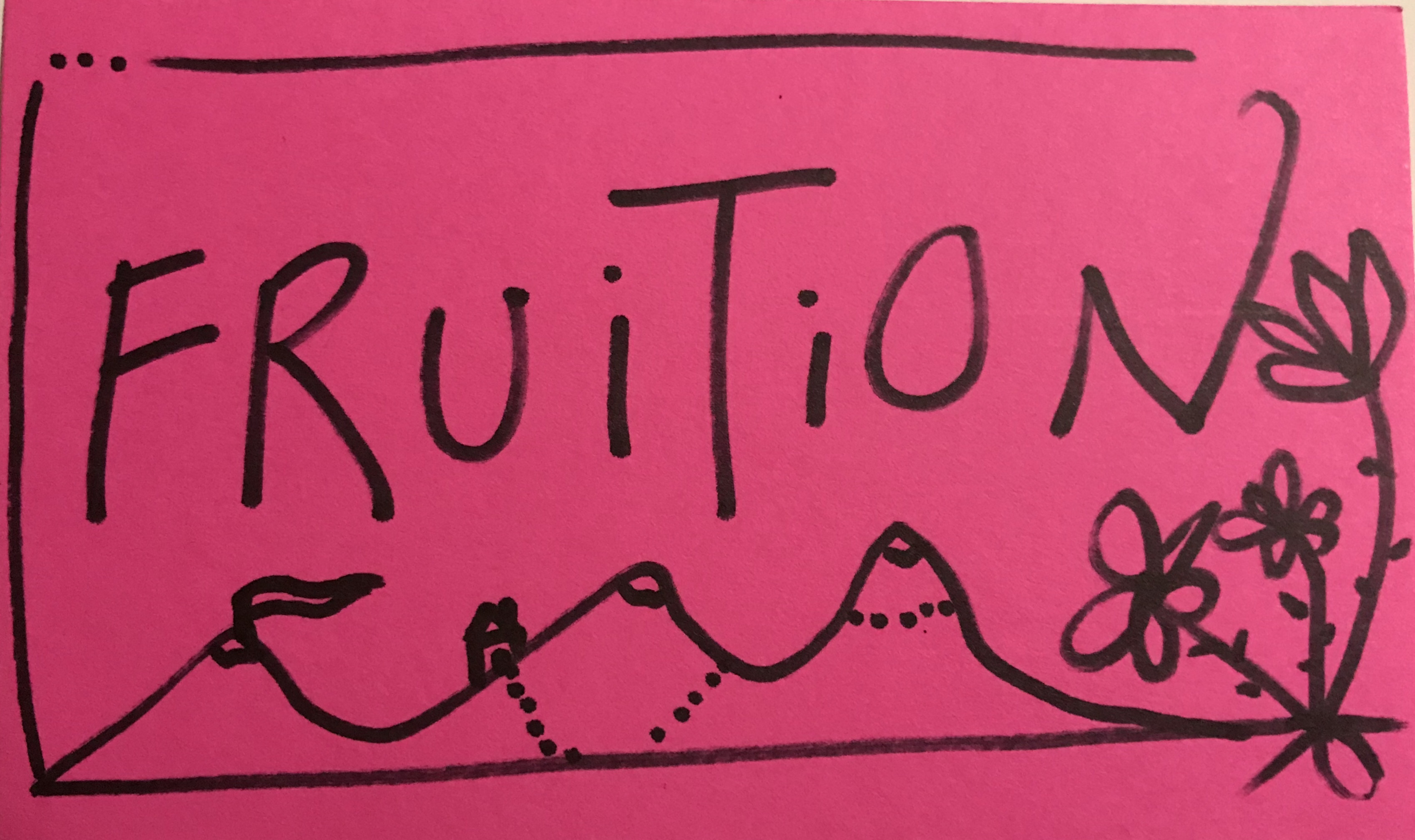 VIDEO SERIES: 5 magical creative ways to shake up your day

If you are looking for a place to summon confidence, move through fears and sync up with your power, internally and collectively, my group coaching program FRUITION is signing up participants... three months of creative community, coaching, structure, accountability, momentum, wild fun and real change. It’s for ten people who are ready to dive deeper and do the inner work, with a group of peers to motivate, witness and hold space for them. Link in comments, check it out if you have a longing for sideways, hilarious, intuitive, counter-intuitive catnip for connecting with your REAL decider, the inner child who is chilling out down there in your unconscious saying YES or NO. #fruition #fruitioncoaching #lifecoach #creativeguide #creativemagic #whatdoyouwant
My inner safe space my source of solace and regeneration... I am getting ready to open Fruition for registration and drawing on my deep reserves to help me focus and ride out technical difficulties. What place do you go to in your mind when you need to feel secure and connected? ... ... #fruitioncreativecommunity #fruition #groupcoaching #creativemagic #lifecoach #creativeguide #innerresource
Incredible workshop with @general.magic.seattle this weekend ... we laughed, we cried, we drew, we danced, we threw pillows, we closed our eyes, we took off our bras, we made beds, we unmade beds, we are dismantling the patriarchy with our full bodies minds and souls. As we left a marching band sauntered down the street which is always a sign you’re on the right track. @h2mtheatre @pfeenie @jenmitas #slumberpartytodismantlethepatriarchy #fertileground
Connecting with my body / my body says slow down to think big / pushing and rushing ahead would only send me spinning in circles / that’s a waste of my time / I need to slow down and wait / wait until the path becomes clear / wait until my body says yes / then go ... ... #dailyselfportrait #creativetherapy #creativemagic #freewriting #freedrawing #slowdowntothinkbig
Dressing up as who we want to be and what we want to see in 2020 #2020vision #familynewyearoutby10
2019 word of the year: fruition. The word came to me in a dream about being in a sauna with Barbra Streisand and the delicious bubbling joy in that dream was a vibe I returned to over and over — what I want in my life, in my coaching, in my art, in my parenting. For 2020 the word that’s coming up is ACTIVATE — the way seeds know it’s time to come to life when they feel the sunshine. We’ll see what my dreams tell me though. They are usually a way more accurate gauge of what I want than anything my conscious mind would like to say. What are you wanting to summon in 2020? #creativemagic #fruition #activate #creativeguide #lifecoach #2020vision